Lithops gets the award for Most Unusual Succulent.

They have a fascinating structure and can survive with little to no water for extended periods, and they look dramatically different from any other succulent, resembling stones, hooves, or tiny brains.

Several gardeners find it difficult to care for these plants because they are so unusual. Lithops, on the other hand, may be one of your simplest (and weirdest-looking) plants once you master the basics.

What on Earth are Lithops? Lithops may be found hiding among rocks in grasslands or dry sandy areas throughout southern Africa, where they originated. They are known as líthos meaning stone and óps meaning face, and they are often referred to by this scientific name. If you prefer, Lithops seems to be much simpler. Call them stone-face if you want.

Each plant has a large root system with thick, joined leaf pairs that barely have a stem.

To safeguard the plant from harsh sunlight and predators (their low profile allows them to blend in with other rocks, making even scientists struggle to locate them), the majority of the leaf is buried beneath the dirt in nature.

To enable light to reach all portions of the leaf beneathground for photosynthesis, the leaves’ tops, or leaf windows, are transparent.

From the gap between the two leaves, flowers emerge. After 3-5 years, each plant produces one blossom during its lifecycle. 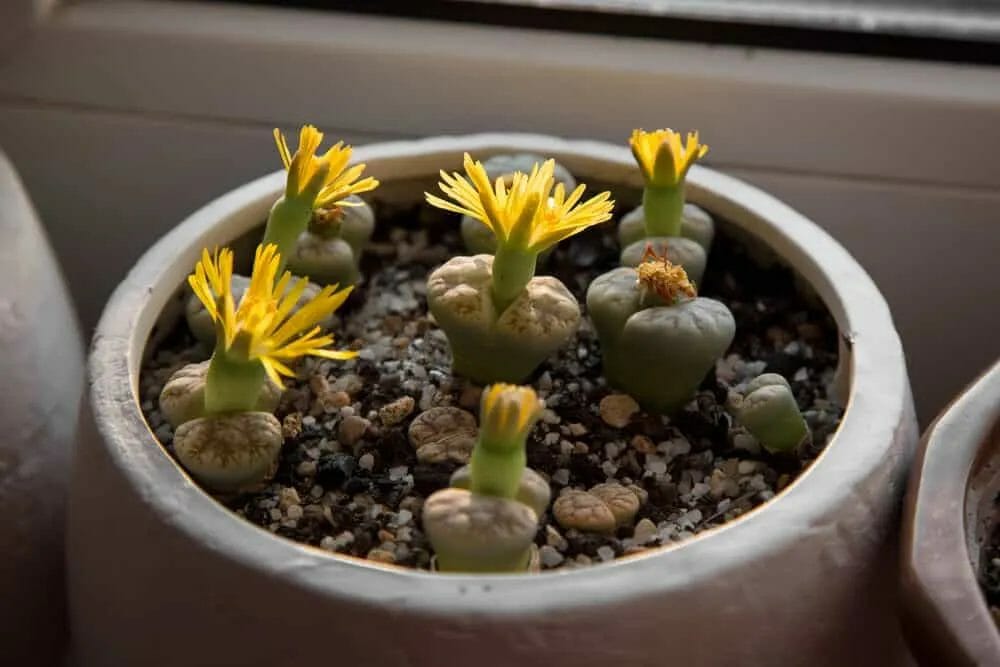 After the bloom withered, a seed capsule develops in the center of the leaves, releasing seeds when it gets wet. As the process repeats, new leaf pairs develop from the plant’s split, slowly absorbing moisture from withered leaves. 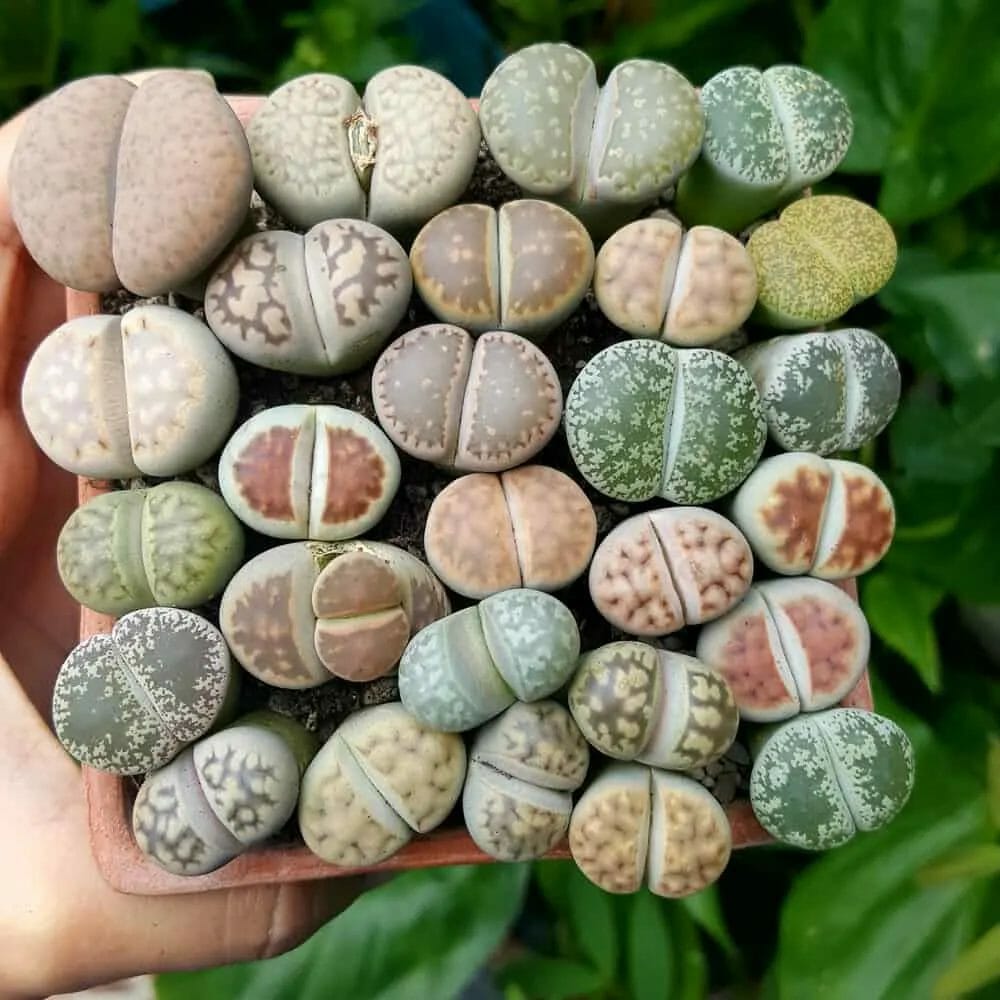 Lithops take care of themselves in comparison to the care of other home-grown plants. Unfortunately, that’s where most problems start.

We overdo it from time to time because we are so used to caring for our plants and worrying about whether we are doing it correctly. Lithops may die as a result of this.

You should have your Lithops for years if you follow these basic care guidelines. 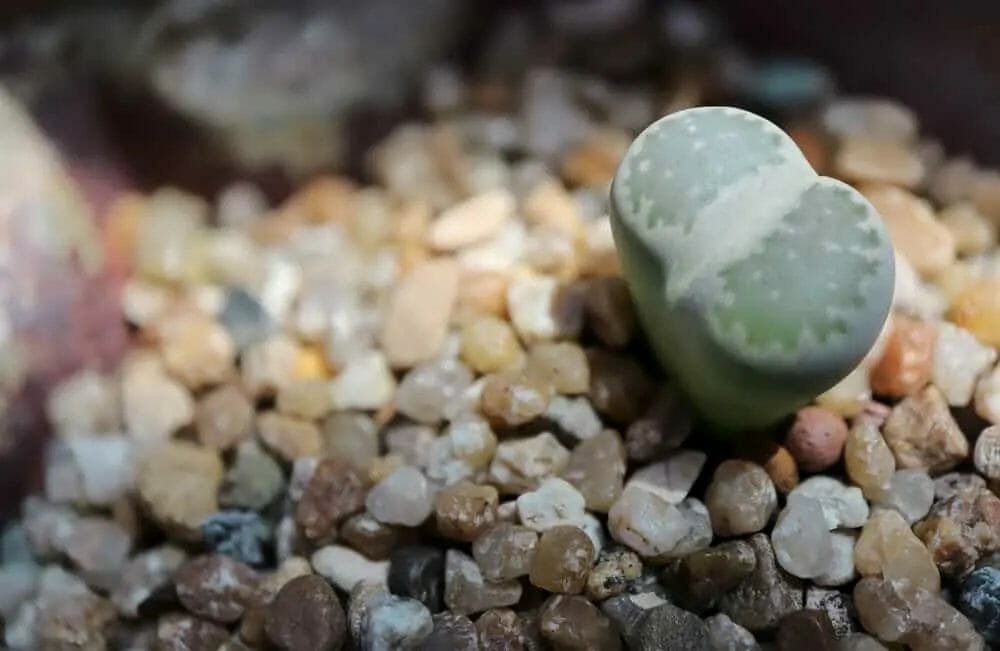 Succulents need a lot of sunlight for development, just like all plants. To prevent scorching, lithops require 4-5 hours of direct sunlight per day and afternoon shade.

Lithops are grown as houseplants by some ambitious gardeners. You might want to give it a shot, but make sure there is adequate lighting throughout the day. Lithops’ leaves will stretch toward the brightest light source and become distorted, known as etiolation, under low-light situations. The leaves’ color (which is arguably the plant’s best feature) may also be dulled by little light.

Lithops don’t like to move around too much. Slowly adjust the conditions of your plant as you relocate it to a new location to allow it time to adapt. Like many others you may know, these plants don’t like surprises. Drought is not a stranger to lithops. They frequently go without water for months in some places with little rainfall.

Lithops’ leaves store enough water to nourish the plant in order to thrive in these conditions. Mimic their natural seasonal rainfall circumstances and resist the impulse to water all the time to keep your Lithops happy. Dry soil is ideal. They prefer it that way.

Do not water your Lithops in the summer or winter months. During these times, they go dormant or semi-dormant, and watering may cause root rot.

Only water the leaves if they start to wrinkle (indicating a lack of moisture) during the summer. When you do it, be sure to water as little as possible. The leaves will be returned to their full, cheerful state with the smallest quantity.

Begin watering with a tiny amount of water every couple of weeks throughout the growing seasons (spring and fall). If the plant can take enough moisture from the air in high-humidity regions, you don’t need to do this step.

Keeping your Lithops away from rain or any drips overhead (from gutters, for example) is probably something that should go without saying after all the no-water talk. You don’t want to risk your hard work by not watering it just to have the weather ruin it for you. 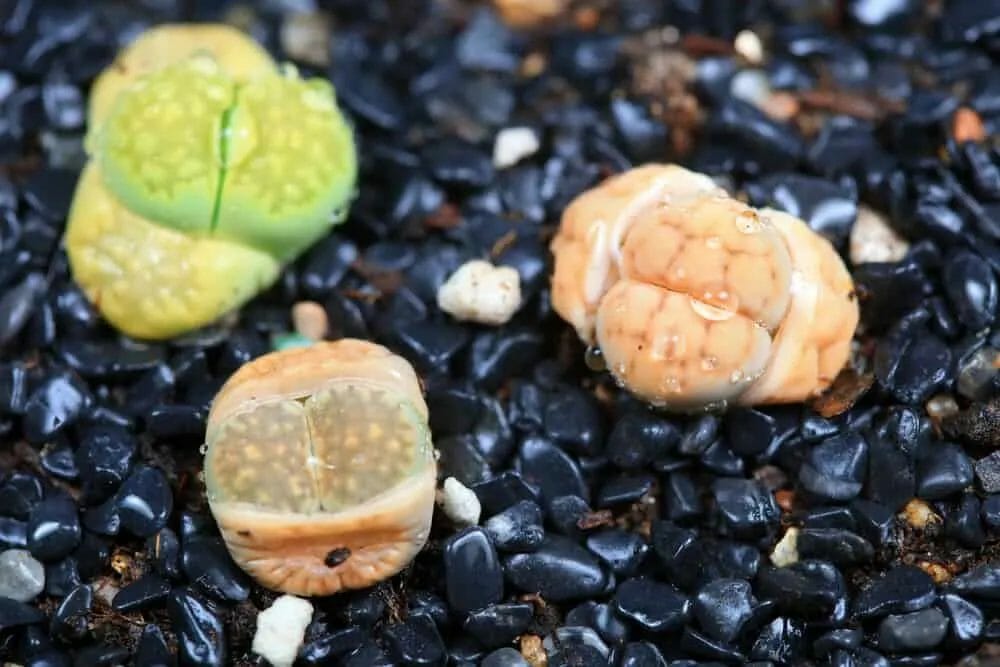 Winter isn’t a fan of lithops. (I tend to agree with them on this one.) Cold temperatures are rare in their natural settings and can kill the plant.

The cell walls of the plant leaves, when exposed to low temperatures, break. Exposed areas, on average, rot and disappear.

Lithops prefer temperatures of 65-85 degrees Fahrenheit, with a little leeway above and below the defined ranges for brief periods. To avoid jeopardizing the leaves, don’t leave them in temperatures below 50°F or greater than 100°F for too long. 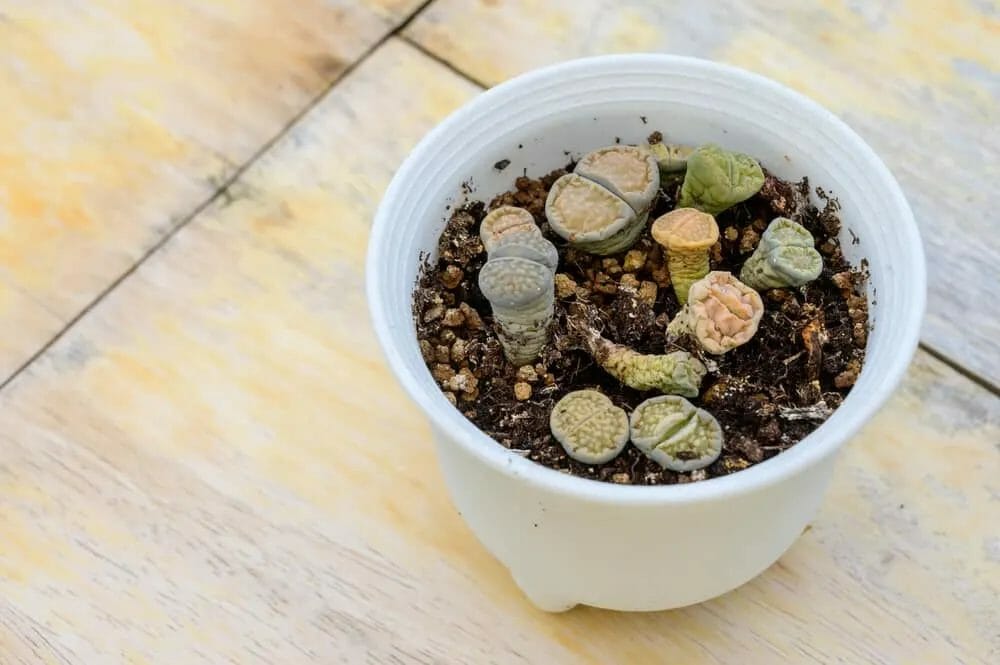 Lithops has a sandy to nearly completely rocky soil in its native habitat. They’re used to working with “low-quality” soils, so they’re tolerant of them.

The ideal blend includes enough grit to gravel and well-drains. Make your own potting mixture by combining 50% potting mix with a combination of sand, rock, and perlite. Fertilizing your Lithops is generally not recommended, particularly because they don’t like it and are not used to it. It’s more likely than not that fertilizing will harm rather than help.

Some gardeners like to help their plants bloom by giving them a dose of fertilizer throughout the growing season. Do it carefully when applying fertilizer for this reason. Since it will scorch the leaves, use a highly diluted cactus fertilizer rather than a normal fertilizer. It’s possible that your plant is just aging if it isn’t blossoming. After five years of development, certain Lithops will bloom.

Pests and diseases are not common problems with Lithops, unlike with other plants. In reality, Lithops are unlikely to be affected by most plant ailments, and insects are likely to overlook them in favor of your more appealing plants. But, here’s how to cope with a pest problem if you’re one of the unlucky ones who gets it: 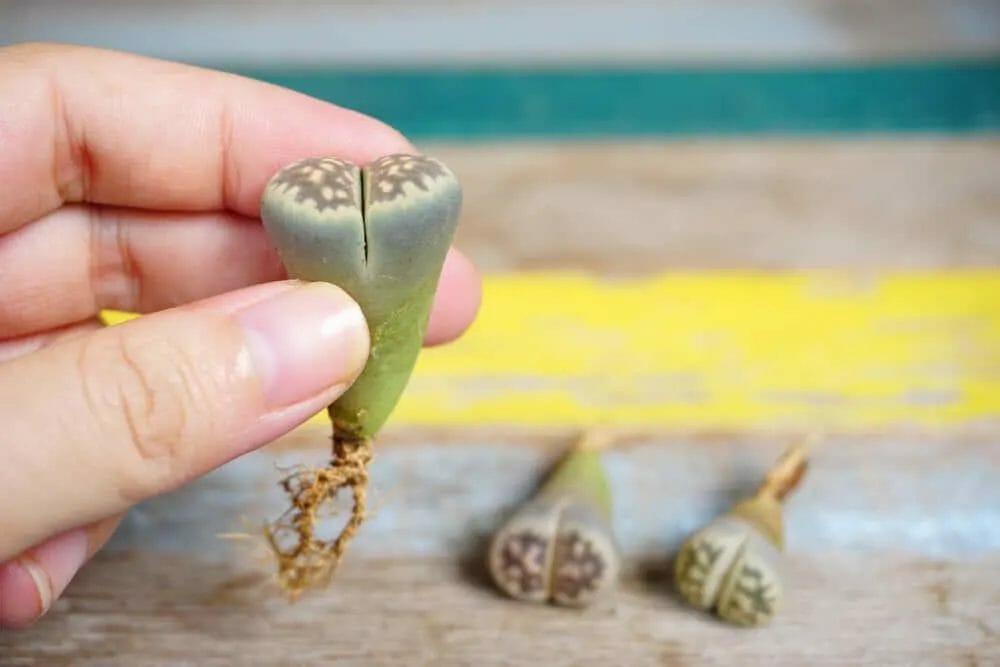 Lithops can be propagated by seed or division in certain situations, and it’s the simplest way to do so. Leaf-cutting is not an option for most gardeners, despite being the preferred method of propagation. It would be like losing a limb if you removed one of each plant’s two.

You may either collect seeds from your own plant or buy Lithops seeds.

Cross-pollinate manually by transferring pollen from one plant to another during the flowering season with a small brush. The plant should create a seed capsule in the middle when the bloom fades, allowing it to be exposed to water when opened. Sprinkle the seeds over a separate pot of gritty soil, cover them with a thin layer of sand, and then cover them with another layer. Until the seeds germinate, keep the soil lightly wet.

While discovering or cultivating a cluster big enough for division is not particularly frequent, Lithops can be propagation by dividing.

Shake off any soil around the roots before removing the plant from the pot. Separate the roots of each leaf pair into individual plants by gently cutting between each pair of leaves.

Lithops grow at a glacial pace. For many months or years, you may not notice the results of propagation. It’s a long-term investment that pays off in the end.

It’s difficult not to want a garden full of Lithops with low-maintenance requirements, an intriguing structure, and a aesthetic that makes non-gardeners stop and ask, “wait, are you growing rocks?”

Almost 40 types are available, each with its own characteristics and oddities that make them ideal for gardeners and homeplant enthusiasts.